Is a unique initiative of SKDRDP (R.) a large sized NGO based out of Dharmasthala, the abode of Lord Manjunatha Swamy and managed by Dr. D. Veerendra Heggade, a visionary of our times.

Shree Kshethra Dharmasthala is a famous Hindu religious shrine of South India. Abhayadana and Annadana (protection to the seekers and feeding of the visitors), are two of the many charities practiced at this “Shiva Temple” run by the Heggade of the temple for over six centuries.

Dr. D. Veerendra Heggade the presiding Heggade for over the four decades has been an acclaimed visionary. In the year 1982, on the occasion of the installation of 39 feet monolithic statue of Lord Bahubali, Dr. Heggade, launched Shree Kshethra Dharmasthala Rural Development Project (SKDRDP(R)) aimed towards the upliftment of the rural poor. The project is the fondest of Dr. Veerendra Heggade’s dreams realized. Sofar more than 25 Lakhs families have been empowered as a result of this project. They promote SHGs to empower themselves. To protect the members of the SHGs and their family members against unforeseen expenses like hospitalization, maternity, and death a scheme entitled Sampoorna Suraksha was promoted in the year 2004.

The greatest hurdle for poor families trying to stand on their own feet have been the sudden incidence of sever disease/accident requiring hospitalization. Hospitalization expenses not only drain the savings but also push the poor to the vicious cycle of debt. Occasions like, births and deaths also put strain on their meager purse.

“Sampoorna Suraksha” (total security) is a welfare scheme to give financial assistance to the poor people in their days of sever health problems necessitating hospitalization. In this programme members contribute to bring security to their insecure life during sever ailment/accident. The entire programme is designed on the basis of mutual help. Interested members of SKDRDP participate in this programme by contributing an annual subscription. Major part of the total subscription amount collected is paid to the Insurance company to look after the hospitalization expenses, for providing “treatment on credit bill basis” in net work hospitals. For this purpose selected hospitals in the project area have been enlisted as network hospitals. The remaining amount is used to provide consolation to nominee on the death of any member of the family. The programme has been formulated after studying the prevailing health insurance models in the country. Minimum administrative expenses and maximum convenience to the members remains the basic motto of the programme.

Annual subscription is based on the premium quoted by insurance company for providing health cover and estimated requirements for providing natural death consolation. For the current year 2015-16 the tariff is Rs.380/- per each members.

Sampoorna Suraksha has becoming increasingly popular with more members joining every year and old members renewing their membership. The annual membership is given here below.

Any request for hospitalisation is processed and instant decision given by a team of Doctors conveyed to the hospitals (preauthorization), who then give treatment on the basis of credit billing to the patient. 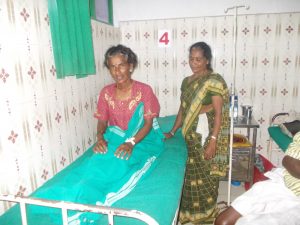 The Claims of medical treatment given to the members on credit bill basis are submitted by the hospitals are processed and sanctioned by the insurance officials stationed in Sampoorna Suraksha office.
9. FACILITIES OF THE SCHEME

9.1. Yearly Contribution from the members are collected along with the weekly savings of the members of the Self-help group so that it does not strain the finance of the family.

9.2. In a single member family, he/she can get cashless treatment to the maximum of Rs. 10,000/-. For more members in the family cover under the programme, increases by Rs.10,000/- per member. The coverage is on floater basis in multiples of Rs.10,000 per person up to maximum 6 members of a family.

9.3. Any one member of the family can avail the benefit for any one ailment to the extent of maximum limit available to the family.

9.4. Medical treatment is made available on credit billing facility in well equipped hospitals with modern amenities, recognized by SKDRDP as network hospitals.

9.5. Emergency death consolation Rs. 5,000/ on death of any member will be paid to the nominee.

9.8. Hospitalization expenses for maternity will be paid for the first two deliveries at Rs. 3500/- for normal and Rs. 8500/- for caesarian delivery.

10.1 Stake Holders: Member of SKDRDP Self-help groups and their family members, staff members of SKDRDP and Shree Kshethra Dharmasthala Institutions and their family members age 3 Months to 80 years, Maximum 6 members in one registration can register under the scheme for 12 months commencing from 1st April, to be renewed every year by paying specified subscription. The family will be given the membership certificate to be preserved and produced to the hospitals whenever they require admission and treatment under credit billing facility.

10.2 Sampoorna Suraksha Division: Every year during February-March field staff of SKDRDP will register the members to the scheme and collect the subscription on behalf of the SHG’s. Subscribers record is maintained in the Sampoorna Suraksha Division. Arrangements are made for providing treatment under credit billing facility at designated net-work hospitals. Credit billing treatment claims from hospitals are verified and submitted by the division to the Insurance Company.

10.3 Insurance Company: Insurance partner will verify the submitted claims and settle the claim amount through the division to the network hospitals.

2 thoughts on “About Sampoorna Suraksha”